The Sharia Law is based upon dualistic ethics. As you will see below in the actual laws, kafirs are abused, poorly treated and can be killed in jihad. Women are second class citizens. Slavery is a well regulated business. Punishments-stoning, amputation, lashings, and retaliation are part of Sharia, as well. 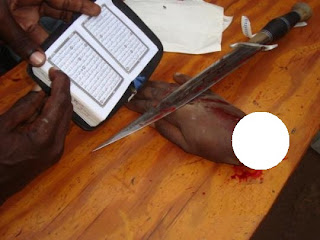 This is how our ministers help Muslims to invade the Justice system of the country. This is going to be a corner stone for Muslims to establish Sharia Law in Sri Lanka.


58 Quadi Court Houses To Be Constructed

M.S Anwer
Fifty eight Quadi courts are to be constructed under a construction programme of the Ministry of Justice.
Quadis are Islamic judges who administer justice in Muslim dominated areas. In Sri Lanka they mostly do work relating to marriage law among Muslims.
Quadis generally hold court at their homes but the Ministry of Justice recently pointed out that this could undermine the impartiality of the judiciary. Subsequently Minister Athauda Seneviratne approved the construction of 58 separate buildings for the Quadis in their respective areas at a total cost of Rs. 38 million.
The number of Quadi courts increased by eight recently due to capacity issues in certain areas. As such new Quadis have been appointed in areas like Beruwala, Sammanthurai, Puttalam, Kinniya and Biyagaha. Quadis are a part of an islandwide association that is under the purview of the Ministry of Justice.
Speaking to The Sunday Leader the Quadi for the area of Beruwala, M.S Anwer said that ‘the primary duties of Quadis in Sri Lanka lie in executing the law coming under the Marriage Registration Ordinance. ‘We engage in marriage, divorce and post-divorce settlement issues. We are appointed solely to service Muslim people and as such can only deal with cases concerning the marital affairs of Muslims and no one else.’
Anwer went onto add that Quadi appointees are usually nominated with the consensus of the community and consist of eminent personalities recognised for their goodwill and knowledge of the laws of Sharia (Islamic jurisprudence). He added that they are paid a nominal salary of Rs. 6000 a month. ‘We have the power of judges when it comes to the area in our purview. Each Quadi appoints an advisory board consisting of community leaders, usually including the chief imam of the local mosque, to assist him in his duties’. In his 11 months of being a Quadi he has handled approximately 75 cases of marriage related issues.
The Sri Lanka Organization of Quadis is currently headed by Quadi Yehiya, who has 32 years of experience as a Quadi, and is based in Ratnapura. Anwer added that his court is currently held at his business office or at a local school. He is in the process of seeking out a plot of land to start construction work on his courthouse.
The Quadi system serves the unique purpose of administering the marriage laws of Islam which are different in certain aspects to the general marriage laws of Sri Lanka. The system also helps poor Muslims avoid the legal costs associated with divorce and settlement cases. Anwer is a retired government servant and has been a school principle for eight years; however most Quadis in Sri Lanka are moulavis or Islamic scholars. He added that he constantly consults his advisory board on case related issues.
Quadis have been around for as long as there have been Muslims in Sri Lanka. In 1344 the island was visited by Ibn Battuta, the world famous traveler. Battuta, a Quadi himself, enjoyed local hospitality in exchange for his invaluable services as an Islamic jurist in the areas he visited. He was reportedly treated with great hospitality by the then Sri Lankan King Vijaya Bahu and he even paid a visit to Adam’s Peak. Upon leaving the shores of Sri Lanka, Battuta’s boat was sunk in a storm and the boat that rescued him was in turn attacked by pirates stranding him on the island. The King again offered his hospitality to Battuta until he saw him aboard another ship that took him back to the Maldives. From there he set off to China.