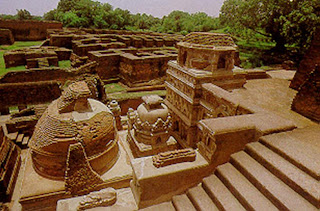 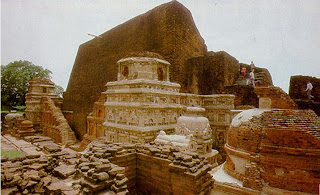 .
The Ruins of Nalanda 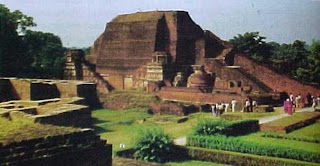 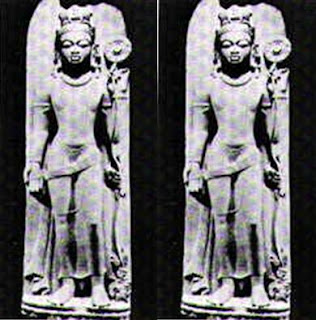 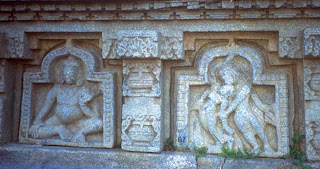 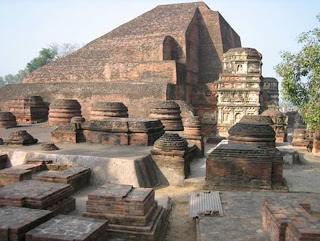 ADDITIONAL NOTES
(1)     Magadha Kingdom was established around 1760 BCE by the Brihadratha Dynasty by king Jarasandha. Magadha kingdom covered mainly the area of Bihar south of the Ganges and later expanded to include Bengal and much of eastern Uttar Pradesh. Rajagriha or modern Rajgir was its first capital and then Pataliputra or modern Patna.  Magadha   expanded in time to be one of the world's largest kingdoms of its time, stretching to the north along the natural boundaries of the Himalayas, and to the east stretching into what is now Assam. To the west, it  reached beyond modern Pakistan, annexing  Baluchistan and much of what is now Afghanistan, including the modern Herat and Kandahar provinces. The kingdom was expanded into India's central and southern regions by the emperors Chandragupta and Bindusara, and Asoka conquered the Kalinga (modern Orissa) region.
Two of India's greatest empires, the Maurya Empire (321 to 185 BCE) and Gupta Empire (320 to 550 CE) originated from Magadha. These empires saw great advancements in philosophy, religion, science, mathematics, and astronomy. Magadha kingdom is heavily mentioned in Buddhist texts. Two of India's major religions Buddhism and Jainism originated in Magadha. From its inception until about 809 BCE, the Magadha kingdom was ruled by many kings of that dynasty.
Haryanka Dynasty of Magadha
The Pradyota dynasty took over Magadha kingdom in 809 BCE and ruled until it was captured by the Haryanka dynasty in 684 BCE. Magadha was ruled by the Haryanka dynasty from 684 BCE to 424 BCE.  Siddhartha Gautama  was born at Kapilavastu in Kosala around the 5th century BCE, during the Haryanka dynasty.  As the scene of many incidents in his life, including his enlightenment, Magadha is often considered a blessed land. King Bimbisara of the Haryanka dynasty led an active and expansive policy, conquering Anga in what is now West Bengal. King Bimbisara was followed by his son Ajatashatru.  Pataliputra became the capital of Magadha after Ajatashatru's death. The Haryanka dynasty was overthrown by the Shishunaga dynasty which was subsequently overthrown by the Nanda Dynasty who ruled for about 100 years.
Mauryan Dynasty of Magadha
The Nanda Dynasty ended around 321 BCE and was followed by the famous Mauryan dynasty.  Chandragupta Maurya founded the Maurya dynasty and established the Maurya Empire. During this time, most of the subcontinent was united under a single government for the first time. Capitalizing on the destabilization of northern India by the Persian and Greek incursions, the Mauryan Empire under Chandragupta would not only conquer most of the Indian subcontinent, but also push its boundaries into Persia and Central Asia, conquering the Gandhara region. Chandragupta was succeeded by his son Bindusara, who expanded the kingdom over most of present day India.
(2)     The prominence of Magadha kingdom and the Maurya dynasty of kings peaked with the reign of the Asoka  one of India's most legendary and famous emperors. The Empire experienced half a century of peace and security under Emperor Asoka. Mauryan India enjoyed an era of social harmony, religious transformation, and expansion of the sciences and of knowledge. Chandragupta Maurya's embrace of Jainism increased social and religious renewal and reform across his society, while Asoka's embrace of Buddhism has been said to have been the foundation of the reign of social and political peace and non-violence across all of India.
The Mauryan dynasty under Asoka was responsible for the proliferation of Buddhist ideals across most of the Asian continent and beyond, fundamentally altering the history and development of Asia as a whole. Asoka sponsored the spreading of Buddhist ideals into Sri Lanka, Southeast Asia, West Asia and Mediterranean Europe. Asoka the Great has been described as one of the greatest rulers the world has seen. The decline of the Mauryan Empire began 60 years after Asoka's rule, and it dissolved in 185 BCE with the foundation of the Sunga Dynasty in the Magadha kingdom.
The Sunga dynasty is associated with the period 185 to 73 BCE. It was replaced by the Kanva dynasty who ruled until 26 BCE. The Kanva dynasty collapsed and the Satavahana dynasty of the Andhra kingdom became the most powerful Indian state.