HOT NEWS
Unfortunately, Malcolm Ranjith is going to be felicitated by the GOSL on 6th  December 2010 and JHU is within this GOSL? This Catholic cardinal and his other Bishops are much more powerful than the JHU and the whole of the Buddha Sasanaya put together.
They managed to ban the film "Da Vinci Code" in Sri Lanka within 24 hours and Sri Lanka was the only country in the world that banned this film. Even the Vatican DID NOT ban this film. It just goes to show how powerful the Christian lobby is in Sri Lanka. The whole of Buddha Sasana can't achieve something like this and we all know what happened to the "anti conversion bill" which has been served a death blow and put inside a coffin.
As we cannot rely on JHU anymore to save the Buddha Sasane (JHU has become a powerless lame duck in the hands of this extremely powerful government) it is up to the Buddhist bhikkus who care to make at least the "Sangha Sammelanaya" a more powerful organization than the Catholic Bishops or the Muslim Congress.
-Dhammika Mawella
ආගම් ප්‍රචාරය කරන්න ආවොත් මෙහෙම කරන්න. 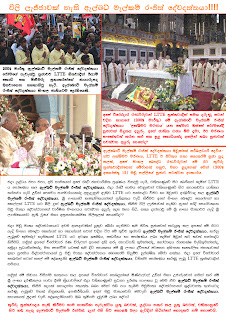