On the 29th April 07 a.m., there was a radio program on the SLBC Swadeeshiiya Sevaya Channel in which one Catholic priest, two Muslim (terrorists) and a Hindu priest participated and their purpose was to sling mud at Sinhela Buddhists and justify the Dambulla mosque within the sacred temple land.
One Muslim terror claimed to be a lawyer, who spoke in hi and dry, very critical of Sinhela Buddhists and demanded that anyone who talks against any minority should be punished by special law to be introduced.
The catholic priest also very comfortably seconded this Muslim bastard, the terrorist, the dirty Islamic jihadist saying that this country is a multi cultural and multireligious society and not any more a Sinhela Buddhist land.
The concerted manifest of the panel of said participants were that Buddhist must shut mouth, keep eyes closed and be inactive, allow all others to play around, conquer the country, Islamized,  and let fuck the Sinhela Buddhists.
If anyone listened to this program would easily understand the essence of the words uttered by participants and all said that this is a multi cultural/religious and Buddhists have no rights to have only Buddhist places of worship, but other also be given access to build their in same places.
The Muslim terrorist (by name a lawyer he said, ) who spoke very critical of Sinhela Buddhists, vehemently said that illegal Mosque will not be removed.
Further he reiterated that any propaganda, media about this issue or talking about Muslims must be banned and new laws to be introduced to punish the Sinhela people.
You will see where we are heading o now. The Dirty Muslims who came here for trade are now by threat and force becoming to be owners of this land by such words fearlessly and directly point at we Sinhela Buddhists.
On the 28th Saturday, on the BBC Sinhela service which was telecast over the same SLBC channel and Minister Rauff Hakeem (the other Jihadist terrorist) threatened very loud and clear, that Dambulla mosque will not be removed and it will be subject to court ruling, which means he is being the minister of Justice we know what is going to come out.
The cat is out of bag now!
Those who are keeping quiet of this threat are only those who have been fucked in their asses by dirty shit Muslims who are invading our Sinhela Buddhist land.
Any pure Sinhela Buddhist cannot keep quiet and these Muslim bastards the Terrorists, Jihadists, The Invaders, Dirty shits must be annihilated from this land who threatened us condemning our Sinhela superiority.
The Big mouthed Jihadist Azath Sally said all Buddhist Temples, Buddha statues everywhere should be destroyed. We should kill this bastard the mother fucker of Muslim bastards.
Look at the situation of agony the Sinhela Buddhist have to face from these dirty bastards now !
We see some Politicians of the govt. are also either keeping mum of the situation or directly supporting Muslims bastards either for financial bribes or their asses would have been fucked by shit Muslims, so that they are speechless.
There are some Buddhist monks also serving the Muslim and catholic masters because they may have been bribed and or being used up in the back by Islamic Jihadists to  utter against Sinhela Buddhist rights.
What the Prime minister and President of this country doing?  Is he also being fucked by Islam Jihadists, the Multiculturalists & multiriligionists?
If no immediate and drastic action taken against these enemies just as it was done to LTTE, we will assume you are no longer suitable to hold that high position and we Sinhela Buddhists do not have protection from you.
Sinhela Buddhists must keep following advice very deeply in your minds now on;
-        Do not purchase anything or don’t do any transaction with Muslims with immediate effect
-        Do not specially consume any food or food product from Muslim restaurants, shops or coming from factories or imported by Muslim businesses.
-        Take a special care of water reservoirs, your water tanks that these bastards will poison them
-        Be vigilant the Muslims living around you, keep an eye of what their activities are, as the Sri Lanka is the newest “ Al Qaida” head quarter
-        Be vigilant these dirty terrors will attack all Buddhist places of worship, Buddha statues, Temples. Suring the Vesak there are plans afoot to attack Buddhists.
Sinhelas, lets round up around Ven. Inamaluwe Sumangala Thero, let’s protect our Heritage, andLet’s protect Sinhela Buddhist Identity of the Hela.
Let’s not allow conspirators to convert this Helaland to a dirty rotting so called multicultural and multireligious.

-MAHINDA KARUNARATNE
Posted by Unknown No comments: Links to this post

http://dharmadveepayeiranama.blogspot.com/2012/04/petition.html
Posted by Unknown No comments: Links to this post

Please Visit the below link and provide your valuable signature.


Below NGOs and people have been included in the petition to recognize their concerns. 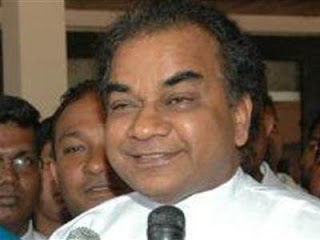 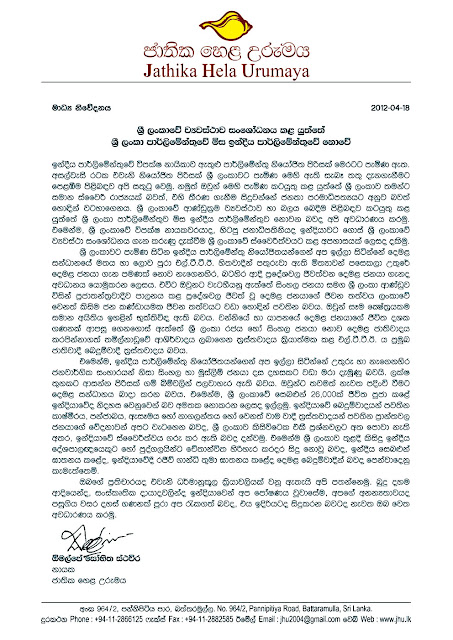 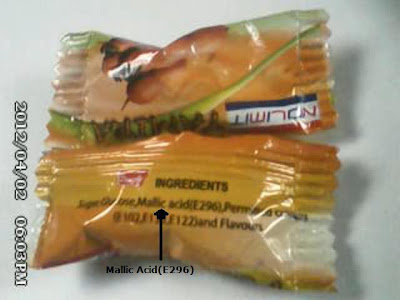