Honourable D.M. Jayaratne,
Prime Minister of Sri Lanka
Hon. Minister of Religious Affairs,
58, Sir Ernest De Silva Mawatha
Colombo-7
Sri Lanka
Your Excellency,
I am a peaceful and proud Sri Lankan Buddhist now living in Canada and have been playing an active role in protecting my mother land’s territorial integrity, multi-cultural community
of Sri Lanka, its war against Tamil Tiger Terrorists both in and outside Sri Lanka and protecting Buddha’s teachings from destruction by crusading proselytes in disguise.
Your Excellency had invited discussion from concerned public on the latest disguise of Christian missionaries to unethically convert/proselyte unsuspecting Sinhalese Buddhists,
called Inter-Religious rubbish, as published on Catholic News website UCAN (See http://www.ucanews.com/2011/02/21/premier-open-to-hear-buddhist-concerns).
Sri Lanka always had an inter-religious harmony for hundreds of years, before and after LTTE terror war. Sri Lankan Christians enjoyed Christmas, Good Friday, Easter holidays on public holidays
and we all enjoyed those holidays with our good Christian friends and their families during those festivities, especially the Burgher community and the coastal Catholic belt.
Since you are serious about opening discussion with critics of the new Inter Religious nonsense, I have several questions for your review, careful analysis and response in public:
1.     Why is the Catholic Church steadfastly, swiftly and aggressively pushing for this new Inter-religious convolutions to people more than ever before?
2.     Are you aware your speech was published with headlines at UCAN website?
3.     I invite you to read the following reported major actions by Catholic/Christian missionaries published on http://www.christianaggression.org :
·         http://www.christianaggression.org/item_display.php?type=ARTICLES&id=1058908729
·         http://www.christianaggression.org/item_display.php?type=ARTICLES&id=1298391666
·         http://www.asianews.it/news-en/Chinese-Catholics-follow-on-line-evangelization-courses-17496.html
·         http://www.catholic.org/international/international_story.php?id=23213
·         http://www.catholic.org/international/international_story.php?id=24221
4.     If you read the above items, you should know by now that PREVIOUSLY BUDDHIST Vietnam has the fifth largest Catholic population in Asia?
5.     South Korea WAS a Buddhist country before Christians converted them forcefully to follow a blind faith?
6.     Same trend in Taiwan, China, India, Thailand (Heavily in Chiang-Mai), Tibet and Cambodia.
7.     The Vatican waited patiently until the King of Bhutan gave its people the governing power of the country to start sending PAID-Christian missionaries
to convert the world’s ONLY 100% Buddhist country to Christianity. The Vatican’s plans were outlined on the website
http://thecatholictimes.com/catholic-missionaries-ready-to-work-in-bhutan-vatican-agency-reports-p573-118.htm but they removed it from the internet as proof
of their sinister campaigns was too accessible. I have pasted at the bottom of this writing a screenshot of their site previously and saved knowing they would take it off.
8.     I wrote to the Governmental Ministers of Bhutan to warn them of the Vatican’s impending crusade war heading toward the world’s most peaceful country resplendent with serenity of the Buddha.
It was published on http://sinhale.wordpress.com/2011/02/02/infiltration-of-western-and-christian-intrusions-to-the-royal-kingdom-of-bhutan/
9.     With all foregoing facts, figures and reports of consequential, irreversible damage to the small number of Buddhists in Asia, why are you falling into this trap of
the Catholic/Christian church propagandists and missionaries of the Vatican? Did you know this is the latest candy-coated disguised gimmick of the Catholic Action and Christian Wars?
10.  Politicians like yourself will govern and leave paving way to another. But we have to protect the Buddha’s teachings that flourished in our resplendent land for 2600 years,
despite unsuccessful foreign invasions by Chola’s from India, Western Catholic Crusaders/Christian War Missionaries who used guns to mass-murder our Buddhist peasants and farmers
to drive fear psychosis and drop Buddhism.
11.  These foreign invaders are back in full force; this time not armed with weapons after their last Church-funded LTTE war was crushed by our valiant Sri Lankan military, but with money, Inter-religious garbage to fool politicians, complacent and slumbering overfed Buddhist monks who cannot fit through a door and NGO’s of all colors and flavours.
12.  Can you name ONE church or Catholic Community destroyed by LTTE?
13.  Cardinal Malcolm Ranjit AGREED and offered SOLIDARITY with Pope’s stand to protect the paedophilic Bishops and priests worldwide, who raped and molested small children in the name of their religion. Do Your Excellency as the Prime Minister and Sri Lanka’s Women’s and Children’s Bureau agree with that? Would not such action promote Child molesting/abusing activities in Sri Lanka’s Churches? See http://www.asianews.it/news-en/Archbishop-of-Colombo-expresses-solidarity-and-support-for-Benedict-XVI-over-paedophilia-scandal-18243.html
14.  As the Honourable Prime Minister of Sri Lanka, how do you plan provide the foremost place, prominence and protection given to Buddhism by the Constitution of the country?
Your Excellency, Sri Lanka needs to flourish under RESPECT for each other’s religious beliefs, not enforcing Christian Religion on others with promises of economic gains or heavenly tours.
People of ALL faiths live together in Sri Lanka already – Please look around. There is absolutely no necessity or need for this new Inter Religious Harmony theme to cover up Church’s penetration
into unsuspecting innocent villagers. Look around Colombo, Jaffna, Kandy, Gampola, Galle, Matara, Hambantota, and every other city, village, hamlet... they are overflowing with
multi-religious, multi-cultural multi-ethnic populations for generations.
The Vatican and Catholic Church falsely crafted a Sri Lanka with disharmonious, racist, discriminating and intolerant society using their media outlets called BBC, CNN, UCAN, Catholic News, Times, Guardian, Herald news media corporations using a Church-invented term called “HUMAN RIGHTS”!!! This translates directly to “Christian Church’s RIGHTS to Freely express the Gospel and Convert”.
We are not blind to see the trends, correlations and hidden ulterior motifs when the dots are connected on the Blind Faith and its actions.
If we FAIL to understand and comprehend ALL THESE facts, foregone arguments, then we truly are already foolishly caught up in their trap.
I anticipate Your Excellency’s earliest response in detail, as I will also publish this in the web.
Yours Patriotically and Truly,
Warna Hettiarachchi
Toronto, Ontario,
Canada
warna@sympatico.ca 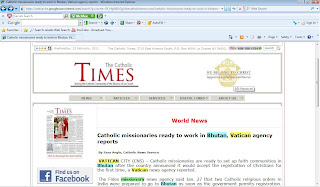